Third Avenue and 149th street would be the heart of many cities’ downtown. Shoppers crowd its sidewalks.

But many storeowners are worried that the Hub—as the neighborhood is known because its four streets intersect to resemble the hub of a wheel—will not remain the retail heart of the South Bronx. They’re afraid a new mall at the Bronx Terminal Market will lure customers away.

“The business community along Third Avenue feels they’re going to lose a significant amount of business,” said Mario Bodden of the South Bronx Overall Economic Development Corporation. “It’s going to be very hard for them to compete.”

Their competition is the Gateway Center, 1.1 million square feet of retail space that opened in September at the Bronx Terminal Market. The mall features a number of brand name retailers and big-box stores like Target, Home Depot, Best Buy and BJ’s Wholesale Club.

“The smaller businesses, they don’t even realize it’s coming,” said Vincent Valentino, executive director of the Third Avenue Business Improvement District (BID), which promotes shopping in the Hub on behalf of storeowners.

“The bigger businesses know it’s going to be quite a change.”

On a Friday afternoon in September, much of Gateway’s six-story parking structure remained vacant. Rosa 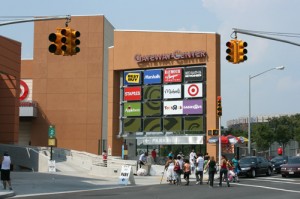 Pena emerged from Bed Bath & Beyond carrying several shopping bags. She’d taken the subway here, her third trip to the mall since its first stores opened in the spring.

“It’s the best thing they could do for the Bronx,” Pena said. “This is very convenient for me. Everything is kind of here.”

Pena, who lives on E. 198th Street, said she still goes to her local stores for small items, but she likes the option of having the mall nearby. If she needs paper towels, it just makes more sense to go to the new BJ’s and buy them in bulk, she said.

While several of the stores at the Gateway have been operating for months, Valentino believes it’s still too early to tell what the full impact of the new mall will be. But he predicts that many business owners, already reeling from the effects of the recession, might not survive.

A few local shops have already closed their doors this year, and several are asking their landlords to lower their rent.

“You can’t handle both of them at the same time,” Valentino said. “You can handle the recession, but not with a major shopping center opening up.”

Valentino, a retired NYPD officer, recalled working in the neighborhood during the early 1970s when many of the shops along Third Avenue stood vacant. He sees a thriving commercial street as a safeguard against the return of bad times for the entire neighborhood. The absence of a business and retail community makes the neighborhood more vulnerable to crime and drugs, he said.

In an attempt to keep residents shopping locally, the BID is petitioning Community Board 1’s Land Use Committee, asking for its support for a plan to build a parking lot on vacant land between Westchester, Brook and Bergen Avenues. Parking would be free.

Many business owners here think free parking is the key to competing with the Gateway Center, where parking costs $2.40 an hour. They also intend to launch a marketing campaign that emphasizes their low prices and the personalized experience of shopping with community stores.

“We’re proactively trying to go after this,” said Mario DeGiorgio, who runs Young Land Kiddie Shop, a children’s clothing store on Third Avenue. While he’s worried about the impact the Gateway will have, he’s hopeful his customers will remain loyal.

“Businesses like mine have been here for 50 years or better,” he said. “We don’t just have customers—they know us on a first name basis, and we know them.”

But supporters of the Gateway see the shopping center as a means to rejuvenate the borough. Most of the buildings of the Bronx Terminal Market were in a state of disrepair before the Related Companies took over to develop the shopping center.

The rebuilt site will “contribute to the resurgence of the Bronx and the revitalization of the immediate neighborhood,” Gateway’s website boasts.

The Gateway Fast Track Unit, in charge of job referrals, has held a number of job fairs for the new stores. Omarro Benjamin, Business Development Officer at the Bronx Terminal Market, insists that most of those jobs went to local residents.

BJ’s Wholesale Club filled 250 new jobs, 150 of which went to Bronx residents, according to Benjamin. Numbers were similar for Target and Best Buy.

“Residents are eager in getting opportunities for employment,” Benjamin said, adding that the turnout for job fairs was overwhelming.

“That’s great,” Valentino countered. “But what about the people that are losing their jobs here when the stores close?”

A version of this article appeared in the Fall 2009 issue of the Mott Haven Herald.