Pummeled by public outcry against a plan to extend the off-ramps on the Major Deegan Expressway, the State Department of Transportation has abandoned the project.

Much-needed repairs will be made to the aging roadway over Mott Haven, but the plan to extend the highway’s exit ramps in order to calm the traffic that backs up as cars merge onto Exterior Street is on hold indefinitely, said DOT spokesman Adam Levine. 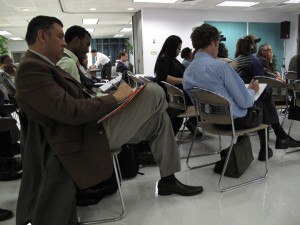 Opponents were particularly incensed that the Deegan plan ignored the city’s desire to transform the Harlem River waterfront with a zoning plan passed last spring designed to attract developers to build high-rise apartments, new commercial buildings and a hotel.

Every speaker at a public hearing at Hostos Community College on Nov. 9 denounced the state proposal. Some speakers also expressed concern that efforts to ease congestion would simply attract more cars, and more pollution. Others criticized plans to use eminent domain to seize existing businesses in order to make room for the new ramps.

“We need more jobs, more affordable housing, more clean air, not more highway,” said Mychal Johnson, a member of Community Board 1 who initiated a petition campaign against the state plan. “The Deegan should be repaired, but not expanded,” he said in an interview.

Caro Samol, who heads the Department of City Planning’s Bronx office, said that the highway project would “cause a domino effect. It would severely hamper, if not outright preclude” healthy growth of the waterfront properties. She insisted that there were other alternatives that could both improve the highway and leave access to the waterfront open.

At the Nov. 9 hearing, Deputy Borough President Aurelia Greene insisted that while the highway needs work, “it cannot be at the expense of the surrounding community.” George Rodriguez, chairman of Community Board 1 and Arline Parks, who chairs the board’s land use committee, echoed the same cry.

The DOT capitulated at a meeting on Nov. 20 requested by the Bronx Borough President’s office, which brought together representatives of the state agency with staff of the city Department of City Planning department, members of Community Board 1 and local elected officials.

“We don’t want to be a bad neighbor in that area,” said Levine, the DOT’s director of public affairs. “What we heard from the community was that the widening would impede” waterfront development.

“They were very clear that at some point they will revisit the issue,” said Sam Goodman, a planner in the Borough President’s office, but not until the rezoning plan has a chance to spur development. Once the area has been built out, the state will consider its options again. In the meantime, said Goodman, other traffic-calming measures will be looked at.

Johnson, a long-time property owner in the neighborhood as well as a community board member, feels that all the work to inform his neighbors about the project and its implications paid off. “They actually listened to the community and public officials,” he said. “I feel wonderful.”

A version of this story appeared in the Winter 2009 edition of the Mott Haven Herald.