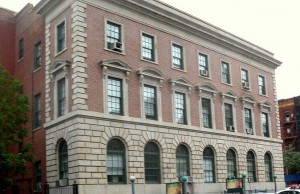 Man shoots an acquaintance and a bystander
A gunman shot a 36-year-old man and a 67-year-old woman  in the lobby of 671 Westchester Avenue on Nov. 4. The shooter hit the male victim in the upper body three times and the woman once in the right side of her torso. Both victims are alive, but police say the woman sustained serious physical injury. Five shell cases of .38 caliber bullets were found on the lobby floor. The male victim identified the suspect as an acquaintance, while the woman, who was returning home from church, said she had never met him. Police have  a suspect, a 33-year-old man whose identity they did not reveal, but say the motive behind the shooting is unknown.

Armed Robbery on Courtlandt Ave.
Police have arrested a suspect they accuse of robbing a man on Courtlandt Avenue at 5 p.m. on Oct. 28 while an accomplice looked on. The victim was walking down the street when two men approached him. One grabbed his jacket, brandished a black handgun and demanded, “Give me everything. Take your chain off,” police said. While his partner watched, the thief took the victim’s wallet, Social Security card, wristwatch and a gold chain with a Jesus head pendant. The stolen goods were worth a total of $350, police said. Barry Norman[E1] , 36, is facing charges of robbery and will be arraigned on Nov. 9. The suspect has been arrested six times in the past 12 years, on charges including trespassing, possession of a weapon and drug raps, police said.

Police nab career crook
Police arrested 20-year-old Victor Guadalupe on Oct. 29 on charges of assaulting a 44-year-old man. The victim was talking on his cell phone on the corner of 152nd Street and Bergen Avenue when Guadalupe approached him and said in Spanish, “Give me your money,” police said. When the victim resisted, Guadalupe kicked and punched him in the head, body and face while attempting to grab his cell phone, police said. Police arrived at the scene within minutes and arrested Guadalupe. He had previously been arrested 14 times over the past three years, for charges including assault, robbery, larceny and drug charges, police said.

Homeless woman slices boyfriend with box cutter
A homeless lovers’ spat  on the corner of Third Avenue and 156th Street left a man with a lacerated arm.  Police have accused Ana Marie Toscano, a 30-year-old homeless woman, of cutting her boyfriend’s arm with a box cutter and inflicting small cuts on his neck following a heated 10-minute argument on Nov. 4 at 5 a.m. Police arrived on the scene and arrested Toscano minutes after the incident. Toscano pleaded not guilty, and has now been released after she “served her time,” according to the Bronx district attorney’s office.

Elderly woman robbed in elevator
A 70-year-old woman was in an elevator of the Adams Houses on Tinton Ave. on Nov. 2 when a man brandished a sharp object and told her she’d be getting off at the eighth floor without her jewelry. The suspect took a pair of earrings, two chains and two rings worth a total of $730, police said.

Woman robbed after cashing check
A 45-year-old woman was exiting a check-cashing place on 159th Street on Nov. 1 when an unidentified man used the hood of her coat to help rob her. The robber approached her from behind, pulled the victim’s hood over her face, pushed her against a wall and grabbed $715 from her right pocket, police said. She was uninjured, and police have not yet identified a suspect.

Teenager robbed at home
An 18-year-old woman was punched in the face and robbed of her laptop by an unidentified man while a male witness fled the scene—all in her own home. The robber entered her apartment on 148th Street on Nov. 4 without her permission, she told police, and approached the other man. When the man fled, the intruder attacked her, she said. He then snatched the woman’s HP laptop from her sofa and left on foot. Police have canvassed the area for suspects but have made no arrests.

Craigslist scammer pulls gun on buyer
A 17-year-old boy who used Craigslist to order a phone became a robbery victim instead. The teenager met the suspect, whom he had contacted through the site on Oct. 29 at 2pm, outside a Courtlandt Avenue building. After the victim handed over $20, the suspect gave him something—but not a phone, police said—and immediately ran from the scene. The victim chased him down but the suspect pulled out a gun and escaped, police said.

Halloween hit & rob
A 49-year-old man was standing on the corner of Brook Avenue and 137th Street on Oct. 31 at 10:30 p.m. when an unidentified perpetrator punched him on the right side of his head and snatched his white iPhone, police said. The victim was so disoriented that he could not even describe the attacker to police.

Robber in ski mask takes gym bag
A ski-masked bandit robbed a 45-year-old man at gunpoint at Trinity Avenue on Nov. 1. The victim was on his way back from the gym and was about to enter his building when the disguised assailant approached him with a black handgun, saying, “Give me your money,” police said. The thief then grabbed the victim’s gym bag, containing his wallet, credit cards, Social Security card and cell phone, and made off with it on foot, police said. The suspect was not identified.

Man threatens woman at ATM for $20
An unidentified man threatened a woman with a kitchen knife at a Chase Bank ATM on 149th Street on Nov. 4, asking her to withdraw a mere $20, police said. He abandoned his plans when a man entered the ATM facility. The would-be robber ran off without a cent and has not been identified by police.

Robber snatches purse, earrings
A woman was walking down 138th Street at 9 a.m. on Oct. 28 when someone pushed her to the ground and tore her purse from her shoulder, police said. The suspect ran from the scene before she could even see his face, the victim told police. Her purse contained her medical insurance cards and a pair of earrings. The bag and the earrings were worth a total of $50, the victim said.

Robbery on 6 train
A thief snatched a gold chain from a 53-year-old woman riding the downtown 6 train on Nov. 3. As she sat on the train, the victim noticed a man slowly approaching her. When the doors opened at 138th Street, the suspect snatched her necklace and ran out, police said. The victim got off three stops later, where she reported the incident to the police. The victim was uninjured. The necklace was worth $50, police said.

Robber takes wallet, phone on 139th Street
A man was standing on the corner of Brook Avenue and 139th Street at 11:25 p.m. on Nov. 4 when a man approached him, hit him repeatedly in the face and took his wallet and his Metro PCS phone from his pockets, police said. The unidentified assailant then fled the scene.

Man robbed of Moscato wine
A man left a grocery store on 152nd St on Oct. 29 with a bottle of Moscato wine, but never got to drink it. As soon as he left the store, an unidentified assailant put him in a chokehold, grabbed the Moscato, and ran off with it, police said. The wine was worth $27.