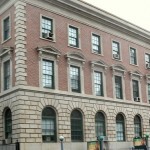 Robbing for Apples
The Charter High School for Engineering, Architecture and Construction Industries in Melrose fell victim to a crook who stole over $42,000 worth of laptops sometime in September, police from the 40th Precinct said. Principal Eugene Foley, who reported the theft, said the thieves had broken locks and windows on their way to the computer lab, then stole 27 state-of-the-art Mac laptops, all less than a year old. The laptops were insured, but getting a police report number, which is required to file a claim, has taken months, said Foley.

“It’s very upsetting, because it interrupts the instruction of the kids,” he said of the break-in.

The school, which has suffered several thefts this year, will be installing additional security doors and cameras, Foley said.

Assaults
The fun ended just before midnight at a party on Dec. 7 when an 18-year-old man was assaulted with a bottle. Police said the youth had left the East 149th Street party and was walking to the subway when an unknown man swung a bottle at him several times. The victim blocked some blows before the bottle was shattered on the back of his head. The victim’s injuries were not reported, but he did not seek medical treatment. Police are searching for the attacker.

A 40-year-old man nearly bled to death on Dec. 4 after a morning confrontation left him with a deep cut to an artery in his thigh, police said. Witnesses saw the victim and suspect arguing on Third Avenue and East 147th Street around 8 a.m. Ernesto Alicea, 43, allegedly stabbed the victim in both legs with a knife, slicing into the left femoral artery, authorities said. The victim survived after receiving treatment at Lincoln Hospital, according to the Bronx district attorney’s office.

Surveillance footage and eyewitness testimony led to Alicea’s arrest, police said. He pleaded not guilty to charges of attempted murder and assault. He is being held on $200,000 bail.

A fight broke out at a substance abuse center in Port Morris on Dec. 6, leaving a 48-year-old man bleeding from his hands. Police allege that the suspect head-butted the victim and then pulled out a kitchen knife, attempting to stab the victim in the chest. The victim defended himself with his hands and backed away from his attacker, but received cuts to the hands.

Russell Lewis, 60, was arrested and charged with assault for the attack. He pleaded not guilty and is scheduled to appear in court Jan. 24.

Domestic disputes
A 25-year-old man was stabbed in the leg during a domestic dispute on the morning of Dec. 8, police said. The victim reported that just after 2 a.m., his girlfriend attacked him with a kitchen knife, stabbing him several times in the left leg. The victim was treated at a nearby hospital, according to the DA’s office.

Quirsten Green, 25, was arrested and charged with assault, the DA’s office said. She pleaded not guilty and is being held on $1,000 bail.

A young woman went to the authorities after her boyfriend tried to strangle her on Dec. 4, police said. The 15-year-old victim reported that she nearly passed out when her 19-year-old boyfriend choked her in their East 148th Street apartment. No arrests were made.

A 19-year-old thug bashed his girlfriend with a club on Dec. 3, according to police. The attack occurred near Lincoln Avenue and East 135th Street at 10 p.m. The victim suffered minor injuries to her arm, and did not seek medical treatment. No arrests have been made.

Could have been worse. A 27-year-old man suffered bruising in a machete attack on Dec. 8, police said. The victim reported being beaten on the back and left shoulder with the side of a machete’s blade, but wasn’t hospitalized.

Police arrested Fredys Bonilla, 27, on charges of assault and criminal possession of a weapon. Bonilla pleaded not guilty and was released on his own recognizance.

Family matters
An elderly resident of St. Mary’s Park Houses said her granddaughter stole thousands of dollars from her closet, according to police. The 96-year-old victim’s daughter told police the victim kept $2,650 in a closet in storage – money that went missing around noon on Nov. 30. The victim’s granddaughter, a 23-year-old woman, is suspected of stealing the money, police said. No arrest has been made.

Robbery
A bank visit ended badly for one man in Melrose, police said. The 60-year-old man withdrew $600 from a Banco Popular on East 151st Street at about 8 p.m. on Dec. 3. He was walking away from the bank when two young men pushed him to the ground and made off with his wallet, containing an ID, benefits card and the $600 withdrawal. No arrests have been made.

Grand Larcenies
A young shopper was robbed inside a Third Avenue clothing store on Dec. 9, police said. The 17-year-old victim put her bag on a stool inside the store at about 4:00 p.m. Less than five minutes later she found the bag overturned on the floor and her ID, Metrocard, and debit card missing. No arrests have been made.

A young woman’s IDs were lifted on the subway, police said. Around 2 p.m. on Dec 3, the 19-year-old victim was jostled by another passenger on a downtown 4 train. At the Grand Concourse – East 149th Street stop, she realized her drivers licence, college ID, debit card and job key were missing. No arrests have been made.

A 31-year-old resident of the Mitchel Houses contacted authorities after her identity was stolen by the new occupant of her former apartment, police said. In September, HSBC sent a new credit card to the victim’s old address, which was activated by an unknown suspect. It was unclear why the victim waited to report the crime to police.

Phone snatchings
Mott Haven continues to be unkind to iPhones, according to police reports detailing a rash of daylight robberies. A young woman was walking to the store on the afternoon of Dec. 3 when an unknown suspect snatched her iPhone 4S from her hand and ran off, police said. The incident happened at about 3:45 p.m. at Alexander Avenue and East 143rd Street.

Another young woman was dispossessed of her phone and ID cards inside a building at East 137th Street and Bruckner Boulevard. The thief approached her from the side at 4:30 p.m. Dec. 6, grabbed the iPhone and cards from her hand, then fled.

The following day, Dec. 7, a third woman lost her iPhone 4S on 138th Street when an unknown man came up to her from behind and made off with the phone at about 3:00 p.m.

No arrests have been made in any of the cases.

A 67-year-old Mott Haven man lost his iPhone 4 in a midday altercation on East 138th Street on Dec. 7. At about 1:00 p.m. a teenager pushed the victim to the ground, took his phone and ran, police said. Police arrested 16-year-old Jamel Shuler and charged him with felony robbery and grand larceny. Shuler pleaded not guilty, and is due in court Feb. 5, 2013, the DA‘s office said.

Another iPhone was snatched mid-phone call by a thief and her partner, police said. A 28-year-old man was walking home along Westchester Avenue around 11:40 p.m. Dec. 8 when a young woman grabbed his phone out of his ear. When he tried to run after her, the crook’s male partner blocked the victim’s path.

Police arrested the woman and Tommie Stephens, 21. The DA’s office declined to prosecute the female, but charged Stephens with two counts of robbery. Stephens pleaded not guilty and was released on his own recognizance.

Keeping your phone in your belt is no guarantee of safety. On East 158th Street, A 29-year-old man was pushed to the ground and kicked in the face by two young men at about 8 p.m. on Dec. 8. While he was down, the thieves took the phone from the man’s belt. No arrests have been made.

Burglaries
A Prospect Avenue restaurant was burgled in the early morning hours of Dec. 3, police said. The crooks entered and left through the bathroom roof, taking $2,000 and the restaurant’s surveillance camera. Police are investigating the case.

A door manufacturer and locksmith company on Bruckner Boulevard was robbed of thousands of dollars’ worth of supplies, police said. On Dec. 4 or 5, a thief broke into the building door with a hammer and stole welding equipment and a white 2006 GMC Chevrolet van. The van was later found the night of Dec. 7 at 126th Street and St. Nicholas Avenue in Harlem. The welding supplies remain missing. Police are looking for the suspect, but a business employee said on the phone the theft looked to be an inside job.

A Mott Haven resident came home to his East 140th Street apartment just before midnight on Dec. 7 to find the door forced open and two TVs, an Xbox and two computers missing, police said. Police reviewed footage from the building’s security camera, but are still searching for a suspect.