When she was 16 years old, Kerenly Rodriguez had a dream. She wanted to be a lawyer and studied law and business at Monroe College. Today, at 26, she works as a sales representative and cashier at the Adorable Angels New York, a clothing store on 149th St., surrounded by plastic wrapped satiny frocks for girls. She has no choice. She has three mouths to feed.

“I have two kids. I can’t just leave this [job] and think I’m going to find another. I’ll be stuck with all the bills and then I’ll be thrown out on the street,” said Kerenly whose daughters, ages 7 and 9, attend P.S.111 in Edenwald. Her law career came to a standstill when she got pregnant and had to pay bills.

The single mom works for the $8.75 an hour minimum wage, and hopes that the hike to $9, which went into effect on Jan. 1, will change her life.

But can the 25 cents increase really make a difference? According to the 2013 census data , despite the wage hike, median gross rent costs in the Bronx will continue to burden minimum wage workers.

Did you know…The census calls rent a burden when it makes up 30 percent or more of the income.

The median gross rent in Riverdale/ Fieldston, is a staggering 85.9 percent of the $9 minimum wage income. The situation is slightly better in the south, Mott Haven/Melrose (50.5 percent) and Hunts Point/ Longwood (62.5 percent), still severely burdening.

Gov. Cuomo offers a solution. In September, following a series of protests uniting fast-food workers under the Fight for 15 campaign demanding a $15-an-hour minimum wage—his wage board, led by Acting State Labor Commissioner Mario J. Musolino, approved a phased rise to that level, beginning with a raise to $10.50 from Dec. 31, 2015 applicable to fast-food workers in New York City.

$15 is a 71 percent increase for fast-food workers, but is it the silver bullet solving the wage problem? Can it really make a difference for underpaid Bronxites saddled with the woes of rising rent costs and gentrification?

“$15 will solve the problem [if there are] no rent increases,” said Sadia Susan, 33, a cashier at Popeyes Louisiana Kitchen on Grand Concourse, who along with her husband pays $1,100 for her Parkchester apartment and sends money back home to her family in Bangladesh.

According to the 2013 census data , at $15 per hour, tenants in Mott Haven/ Melrose would become burden free (29.5 percent), while those in the Bronx’s expensive neighborhoods such as Baychester, Williamsbridge, Morris Park and Bronxdale would face moderate burden as opposed to the current severe burden. Riverdale would still be severely burdening at 50.1 percent. 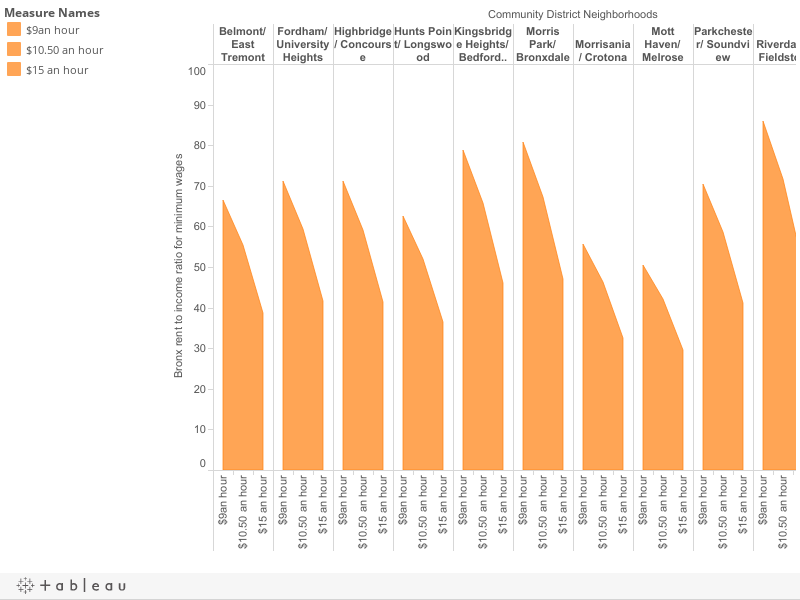 Minimum wage hirers disagreed about the benefits of a higher wage.

“$15 dollars is too much. Our food prices are also going up. Then, people buy less food,” said Mohammad Rahman, 38, manager of Popeyes Louisiana Kitchen on the Grand Concourse, adding that only $12-13 hourly wage was feasible.

Antonio Monzon, 49, manager of Dunkin’ Donuts on Morris Ave., worried that employers wouldn’t be able to afford hiring, leading to understaffing of businesses and reduced hours for employees.

While, the wage increase has made the fast-food business attractive for prospective employees, it has disgruntled retail store workers in the South Bronx.

“It’ unfair. I think it [minimum wage] should be more for retail stores because we deal with customers, a lot of shipping and we have more work here than in fast-food restaurants,”said Lilibeth Gonzalez, 19, who works part-time for the V.I.M. apparel and shoe store on Bergen Avenue while she studies civil engineering at LaGuardia Community College.

Her manager, M.D. Khan, 39, said, “I remember paying the cab driver $4 for a toll in 2003. The minimum wage then was $ 5.15 an hour. Today, the minimum wage is $8.75 while the toll has been doubled to $8,” while recounting toll fares for the Robert F. Kennedy and Bronx Whitestone Bridges along his journey to New York City from Bangladesh 12 years ago.

While, the data shows $15/hr can make a difference, minimum wage fast-food workers will have to wait until 2018, when the wage will be mandated to reap the benefits.

NYC Parks Stewardship is inviting neighborhood volunteers to come learn about local trees. Volunteers will be taught to identify, cultivate,...

The Department of Climate & Environmental Justice is set to prepare the city for the effects of climate change The...

Mott Haven-based nonprofit En Foco, which spotlights the work of artists of color, is launching three photo exhibitions this June....

Days after New York officially moved its COVID alert level to “high,” the federal government is offering a third wave...

After an extended hiatus throughout lockdown, New York Restoration Project has recommenced its tree giveaways. On May 21, the giveaway...