Many South Bronx teens who test positive for a sexually transmitted disease, or STD, sit down with Geidy Galdez, a public health educator in the family planning program at Lincoln Hospital’s Teen Health Center.

Galdez’s first question is simple: “Do you know what you have?” The teens usually reply that they have “an infection,” prompting Galdez to move on to her next question: “Do you know how you got this infection?”

“Sometimes they think they have a urinary tract infection, or something else. They say: ‘I don’t know, maybe my underwear was too tight,’ that’s the excuse. Even when I’m looking at their medical record,” said Galdez. “I always try to encourage them to be honest.”

The rate of STDs among teens between declined 2012 and 2014, but has started climbing again, according to a report by the CDC.

While there appears to be no single reason for the increase, there are clear commonalities. The highest rates of teen STDs around the city are in low-income neighborhoods that lack the resources available to teens in richer areas.

Galdez and other public health educators and professionals say that a lack of frank talk about sexuality, and of the political will to fund health education in public schools, is a major part of the problem.

“There are certain populations that bear the brunt of these infections,” said Matthew Prior of the National Coalition of STD Directors.

Five of the city’s top ten neighborhoods for STDs per capita are in the South Bronx. Of those, Mott Haven’s rates are the highest.

The contrasts in STD rates between rich and poor neighborhoods is startling. For example, the rate of gonorrhea for women 15 to 19 in Mott Haven is almost 36 times higher than the rate in South Beach, Staten Island. It’s also the highest teen STD rate in the state.

Educators say they are hamstrung by the system. 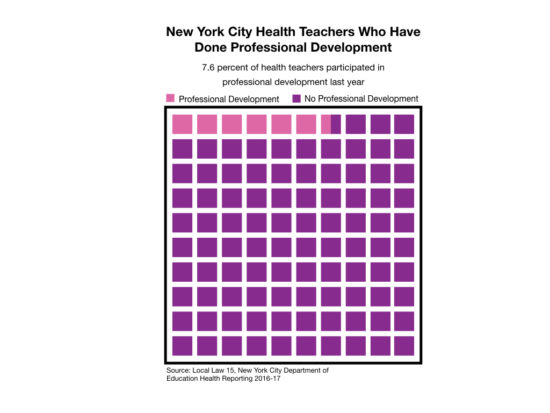 Many of the teachers she works with are not comfortable teaching about STDs, and others lack the proper training. A report by the city comptroller’s office found that 88 percent of middle and high schools have no teachers licensed to teach health ed. Of those who are, fewer than one in ten participated in any professional development related to sexual health education within the last two years. Although professional development is offered for teachers through the Office of School Wellness, the DOE doesn’t require it.

New York State law mandates that students take a health education class in middle school and one more in high school, but that requirement is often ignored. In May, schools chancellor Richard A. Carranza announced the launch of Health Works, a $24 million initiative to ensure that all city middle and high schools meet state health requirements by June 2022. 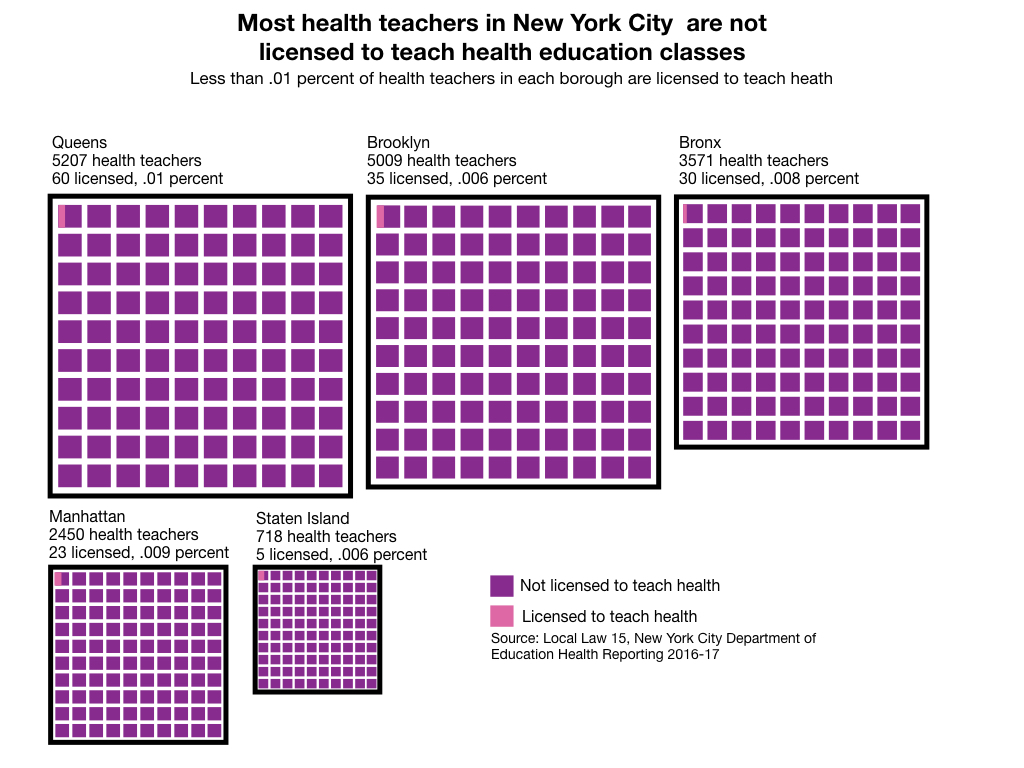 Lisa Rivera, who chairs Community Education Council 7 in Mott Haven, said that conversations about sexual health should begin at home, but “most parents nowadays parents are like, ‘I can’t talk to my child about sex.’”

Dr. Diane McKee, Vice Chair for Research, Department of Family and Social Medicine at Albert Einstein Medical College, says that  there are ways of getting the conversation started between teens and health care professionals.

“We have to make sure that we have managed to incorporate at least a few minutes of time alone, away from the parent, where we can ask the kids what is happening,” said McKee.

“If they are having the conversation, it’s more about pregnancy than STIs,” said Galdez. “As a parent, that’s the first thing you tell your kids, don’t get pregnant! They don’t talk like ‘don’t have sex without protection because you could get gonorrhea or syphilis or HIV or chlamydia.’”

But not all birth control that prevents pregnancy protects from STDS, a message that many teens are missing. The youth risk behavior survey of New York City high school students showed that in 2016, roughly 40 percent of teens did not use a condom the last time they had sex.

Kimberly Suarez, a nurse at the Teen Health Center, said that if teens tell a doctor or nurse that they are sexually active, the clinic will suggest that they be tested for STDs. Tests are not billed to insurance, and the staff keeps the results are kept private from parents.

Suarez said that about half of the patients the center sees in a day are screened for STDs, either with a urine test that screens for chlamydia and gonorrhea, or a blood test for HIV.

But teens have to come back to the clinic to find out the results of those tests – Suarez cannot give them that information over the phone.

“Sometimes the patients don’t follow up with appointments,” said Suarez, adding that she will try to call them multiple times but they often change phone numbers. “Until they see a symptom or a partner comes back with a test that’s positive, that’s when we will see them come back.”

This is an issue because it is possible to have an STD without showing symptoms.

“There is a substantial pool of young women who when exposed to chlamydia may not know that they have been exposed,” said McKee. “There is even a pool of boys that can have it and not know it. They can expose more female partners and put those partners at risk.”

The public health implications of not catching these infections early are dangerous. Chlamydia and gonorrhea can lead to pelvic inflammatory disease for women, as well as cervical cancer. For both men and women, STDs can lead to infertility.

The consequences of not dealing with the problem are going to get worse. Although chlamydia, gonorrhea and syphilis can be treated with antibiotics, they are getting harder to treat. The CDC is especially worried about antibiotic-resistant gonorrhea, meaning an infection that has evolved to develop immunity to the usual antibiotics used to treat it.

There is also concern that gonorrhea is not being treated correctly by health professionals, which can help the disease become antibiotic resistant. A report by the CDC showed that about one in five patients who tests positive for gonorrhea is not getting the correct antibiotic treatment recommended by the CDC, which is a combination of two drugs called azithromycin and ceftriaxone. If patients get only one, or get a different combination of drugs altogether, it is not as effective in treating gonorrhea meaning that they can continue to spread the disease.

The CDC considers this issue one of the nation’s most urgent public health threats and is closely monitoring gonorrhea cases.

Yet despite the increase in STD rates, the Center for Disease Control and Prevention has received less funding every year since 2003, according to the National Center for STDs (NCSTD). In 2018, the agency received a slight increase – $5 million– which matches the amount they received in 2003. Adjusted for inflation, the total purchasing power of the CDC has decreased by 40 percent over that period.

To address STD rates, the CDC would need at least $70 million more than is currently being allocated by Congress, according to the NCSTD. But there is little evidence that will happen.

In July 2017, the Department of Health and Human Services announced that grant funding for the Teen Pregnancy Program would be cut two years early, in June 2018. Funding for the federal Personal Responsibility Education Program will also be rolled back. Instead, the Trump administration has been pushing for abstinence-only sex education.

“We are experts and we know that young people need information and power. Just to say to them “don’t have sex,” or “don’t use drugs” — this doesn’t work,” said Dr. Angela Diaz, director of the Teen Health Center at Mt. Sinai Hospital. The hospital’s Adolescent Health Center helps 11,000 teens and young adults annually and intends to raise the number to 15,000.

The Adolescent Health Center also has full time clinics in six high school buildings in the city, where patients aren’t asked about documents or insurance and all are tested for STDs. Along with tests and treatment, The Center has social workers and lawyers on staff to help. Dr. Diaz said that 10 to 15 percent of patients faced some form of sexual violence.

“There’s nothing wrong with those kids, what is wrong is the system,” she said. “Social, political and economic conditions of those neighborhoods do not give those kids the empowerment, access to knowledge, access to contraceptives, to education, hope.”

“But if you bring them wonderful programming, wonderful schools, wonderful programs like sports, engaging in social activities, a lot of comprehensive education, clinics, you empower those kids, you do leadership training, you give them jobs — you wouldn’t have those things.”