The owner of a Melrose landmark is looking for a tenant

The former Bronx Courthouse, the enormous, stately building at the corner of East 161st Street and Third Avenue, has been empty for 31 years.

Now, there’s been a flurry of activity, as its owner seeks a tenant. He’s enlisted a local blogger to help publicize the effort, and says he’s ready to rent part of it to a health club, if more grandiose ideas for the entire building don’t come to fruition soon. 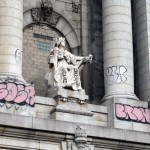 The building was once the only bustling courthouse in the borough. Today, it’s beautiful but abused. A chain-link fence seals it off, but graffiti artists have still managed to deface it. Just under an ornate statue of Lady Justice, someone has spray-painted the word BRONX in pink block letters.

The city closed the doors of the courthouse in 1978 and allowed it to fall into ruin.

For years, the neighborhood nonprofit Nos Quedamos fought to acquire the property to convert it into Melrose’s town hall–a community center with a library and even an office for the Bronx Borough President–that it envisioned as an emblem of the neighborhood’s rebirth.

Politics got in the way. The Giuliani administration, at odds with Bronx Borough President Fernando Ferrer, turned its back on Nos Quedamos, which had raised millions earmarked for renovations, not for purchase.

Instead the city auctioned the courthouse off to developers—twice. The current owners, Henry Weinstein and his business partner Benjamin Klein, bought the building for $300,000 in 1998.

Now, they say they are once again looking for tenants to occupy the old courthouse and that they hope it can be turned into something to serve the neighborhood.

“We really had our hearts set on community use for this building, but somehow we’re finding it difficult to identify a substantial enough user,” said Weinstein in an interview.

Yolanda Gonzalez, the head of Nos Quedamos, said that while the group hasn’t reached out to Weinstein directly, it remains very much interested in the building.

“We’re still looking to see how we can work with the current owner, making sure we can bring the building back to its original purpose–to serve the public,” Gonzalez said in an interview. “It was built with public dollars.”

She’s approached almost daily, she said, by members of the community who want to know what’s going on with the building and who are frustrated by the fact that it remains derelict.

But Weinstein insists the years of vacancy are not the result of neglect but of waiting for the right tenant.

“I always could have turned it into self storage, but I felt it was such a nice building, it would be a crime,” he said. “I bought it for a cheap price, so because of that, I thought I could really afford to wait.”

Several businesses have expressed interest, Weinstein said, including a medical group and a health club.

But he’s still hoping a school or a nonprofit will come through to rent the space, he said, adding he does not object to setting aside a portion of the building for community use, possibly in the form of a daycare center or an afterschool program.

Last year, the building was slated to become the home of a new charter school, the Bronx Academy of Promise, but the school pulled out.

“They weren’t really ready for a building of that size,” Weinstein said.

Other members of the community have weighed in on what they think the building should be used for.

Ed Garcia Conde, who runs the neighborhood blog “Welcome to the Village of Melrose,” recently took a tour of the courthouse with Weinstein, and asked readers for suggestions. Responses included an Apple Store, a Barnes & Noble, a children’s theatre and an affordable grocery store.

“I think it’s time we got something going in there that we can all be proud of,”
said Garcia Conde, who also works in real estate and described Weinstein as “a friend and colleague.” With all of the development happening in Melrose, it shouldn’t be long before Weinstein fills the space, he said.

Development in Melrose has been taking place under the Melrose Commons Urban Renewal Project—a plan that Nos Quedamos helped develop—which includes blocks of new affordable housing as well as a campus for Boricua College.

“I think it’s something that’ll be picked up pretty quickly, when people start learning the demographics—that it’s not the same demographic as 30 years ago,” Garcia Conde said. “There’s a lot going on.”

Weinstein said that he hopes to have a tenant lined up within the next six months or so, and predicted that the building could be restored and ready to use in as little as six to nine months.

“If I don’t identify a non-for-profit or a school, if none of those pan out, I’m just going to take my health club and put them in there, in a third of the building,” he said.

“We’ll see what happens after that.”

A version of this story appeared in the Winter 2009 edition of the Mott Haven Herald. Contact the author at jeanmarie.evelly@motthavenherald.com.

In the aftermath of the tragic fire that claimed at least 19 lives in the Tremont section of the Bronx...

Residents, NYCHA reach agreement: Repairs must be made for moisture damage in public-private run buildings

NYCHA residents are hopeful a new agreement between the Housing Authority and two grassroots coalitions, including one based in the...

In an effort to address limited book access in the Bronx, a Brooklyn-based nonprofit has launched a 10-day fundraiser to...

New York City officials took action over the past two weeks against two homeless shelter operators doing business in the...

A NYC group that advocates for alternatives to incarceration is launching a Communities Not Cages campaign with a digital teach-in...