While basketball and baseball remain king in the South Bronx, a small but growing number of young athletes of color are trying their hand at “laxin,” a sport typically associated with fancy prep schools.

“Laxin” is slang for playing lacrosse, a sport relatively ignored in the “Boogie-Down” until a nonprofit group, Bronx Lacrosse, started luring young players with dedicated coaching, tutoring and opportunities to shine as athletes.

Youth from across the area are now congregating in Highbridge at least four times a week to play a sport that was once associated with individuals of affluent backgrounds.

Bronx Lacrosse founder and coach Dan Leventhal said the idea originated when he was a Teach for America fellow teaching math at Highbridge Green Middle School, where he observed higher rates of asthma, obesity and hunger among students.

As a former player on the Tufts University lacrosse team and a former program director for Israel Lacrosse, Leventhal decided the sport offered a promising way to address these disparities, while also giving students an opportunity to achieve educational and life success.  Leventhal began recruiting students from the Highbridge Green Middle School as well as the Rafael Hernandez Dual Language Magnet School to form a team, even as he was completing his Master’s degree in education at Fordham University.

His strongest pitch was that colleges and universities are looking to diversify lacrosse, so it can provide an excellent pathway to higher education.

“This is a sport that’s played by a majority of white people. And if you’re coming from an area of a diverse background, it can present an opportunity that basketball probably can’t, because there’s so many kids that play basketball,” he explained. 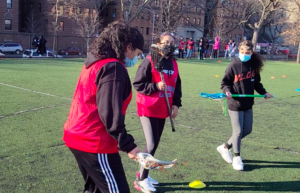 Bronx Lacrosse consists of 150 students/players. The demographics listed on the Bronx Lacrosse website show the makeup of the team’s players as being 75% Latinx and 25% of Black or African-American descent, with females making up 53% of the roster. And although the team is fully comprised of Bronxites from all over the county, the South Bronx is the most represented part of the borough.

As the young ladies of Bronx Lacrosse took to the field at 1055 Jerome Avenue on a warm spring afternoon, their competitive spirit was on full display. They approached the scrimmage as a real game.

Second year player Lizmary Rojas is elated to be on board. Rojas’ fascination with the sport started when she first picked up a stick and caught several passes.

“The program [Bronx Lacrosse] is very special to me because this is a way, especially right now in the pandemic, where I can stay safe and be active,” the 13-year-old said.  “I know many of us are stuck at home and are probably bored or like trying to think, so I know that this is definitely something that keeps my mind off of all the bad things.”

Bronx Lacrosse players have experienced their fair share of achievements on and off the field. Last season, the boys and girls middle school teams won the middle school championship.

Both teams play their home games at Randall’s Island. Bronx Lacrosse competes against other schools in New York City, Westchester County and Connecticut. Hunter Middle School and The Anderson School are just a few of Bronx Lacrosse’s rivals.

Bronx Lacrosse has several funding streams to cover expenses incurred for uniforms, equipment, park permits, and coach salaries. The nonprofit receives support from private donors, as well as the city Department of Education and the Department of Youth and Community Development, through partnerships with WHEDCO [Women Housing Economic Development Corporation].

Rojas’s teammate, Ashley Zamora, 14, said playing on the team has helped her focus on the future and her dreams, and tutoring offered by the nonprofit has helped her raise her grades.

“And when it came to the sport, it helped me improve as a person and it helped me become a better team teammate,” she said.“I plan on becoming a leader for the younger lacrosse players. And I want to get into a good college to be a surgeon.”

Leventhal is proud of the strides that Bronx Lacrosse has made since he introduced the sport to the neighborhood five years ago. But at 29, he said he has plenty of bigger ambitions for the future.

“We’re looking to give kids an opportunity to achieve life success,” he said. “That’s what we’re trying to do.”

Politicians across the Bronx flocked to social media this week to laud the conviction of police officer Derek Chauvin for...